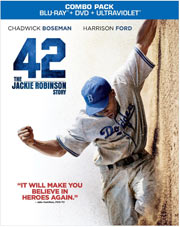 42 tells the story of two men—the great Jackie Robinson (Boseman) and legendary Brooklyn Dodgers General Manager Branch Rickey (Ford)—whose brave stand against prejudice forever changed the world by changing the game of baseball. In 1946, Rickey put himself at the forefront of history when he signed Robinson to the team, breaking Major League Baseball's infamous color line. But the deal also put both Robinson and Rickey in the firing line of the public, the press, and even other players. Facing unabashed racism from every side, Robinson was forced to demonstrate tremendous courage and restraint by not reacting in kind, knowing that any incident could destroy his and Rickey's hopes. Instead, Number 42 let his talent on the field do the talking—ultimately winning over fans and his teammates, silencing his critics, and paving the way for others to follow. (Gary Reber)

Special features include three featurettes: Stepping Into History (HD 09:14), Full-Contact Baseball (HD 10:05), and The Legacy Of The Number 42 (HD 09:17); upfront previews; and an UltraViolet digital copy.

The 2.40:1 1080p AVC picture was photographed digitally but exhibits impressive film-quality texture and color. Hues are warmly and richly rendered and so very cinematic. Dodger blue, and bright greens and reds are vibrant. Fleshtones are naturally hued as well. Resolution is outstanding, with fine detail exhibited on uniform and glove textures, facial features, hair, and objects. The dirt flies in the air and every granule is depicted. Contrast is perfectly balanced with deep, solid blacks and revealing shadow delineation. The stylization is achieved with the application of a lightly warm sepia filter. The picture is absolutely engaging visually and captivating, exhibiting a natural dated appearance that is effective. (Gary Reber)

The DTS-HD Master Audio™ 5.1-channel soundtrack sounds perfectly natural throughout, without artificial deep bass augmentation. While mostly frontal focused, during the actual baseball field play, the soundfield is naturally energized with a surround presence that captures the sounds of real fans. The orchestral music score and oldie big band sounds perfectly set the emotional tone of the story. The recording quality is excellent, with a natural spacious presence that extends to the surrounds. Atmospherics and sound effects play up the sounds of baseball bats striking balls and slides in the dirt. Every sound element is effectively realistic. Dialogue is naturally projected with good spatial integration. This is a terrific holosonic® soundtrack experience that captures a historic slice of American history. (Gary Reber)