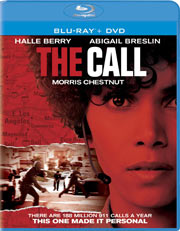 In The Call, veteran 911 operator Jordan (Berry) takes a life-altering call from a teenage girl (Breslin), who has been kidnapped and thrown into the trunk of a madman's car. But with the clock ticking, Jordan soon realizes she must confront a killer from her past to put an end to a serial killer's hunting rampage. (Gary Reber)

The 1.85:1 1080p AVC picture was photographed with the Arri digital camera system. The image quality is problematic because of poor black-level saturation. The picture exhibits a thin film haze that varies in intensity depending on the scene and otherwise dulls clarity. Close-ups are the exception, with fine facial features rendered, as well as hair and clothing. In this regard the imagery is razor sharp. The color palette is naturally hued with natural saturation, except for the poor black levels. If it weren't for the poor black levels, this would be a reference presentation. (Gary Reber)

The DTS-HD Master Audio™ 5.1-channel soundtrack sounds dynamic and spatially enveloping with strong, directionalized sound effects during the action sequences. The collage of 911 calls in The Hive sound realistic and envelop the soundfield. Bass energy is, at times, intense in the .1 LFE channel and provides a solid low-frequency foundation to the music score. The music is nicely recorded with a wide soundstage that extends to the surrounds. Atmospherics, Foley, and sound effects are also effectively presented. The sonics are naturally convincing and dynamically energized when appropriate. Along with the tension, dialogue reproduction is consistently natural, intelligible, and spatially integrated. (Gary Reber)