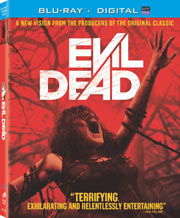 The 2013 version of Evil Dead is the remake of the horror classic. The original producers reunite to present a genuinely terrifying re-imagining of their original horror masterpiece. Five young friends have found the mysterious and fiercely powerful Book of the Dead. Unable to resist its temptation, they release a violent demon on a blood-thirsty quest to posses them all. Who will be left to fight for their survival and defeat this unearthly force of murderous carnage? (Gary Reber)

The 2.39:1 1080p AVC picture was photographed with Sony's CineAlta F65 digital camera system. The visual imagery is intensely frightening and utilizes a stylized color palette to dramatic effect, aided by cinematic lighting that highlights shadow details. Blacks are deep and solid, though, at times purposefully crushed. Often the color palette is desaturated and at other times hues appear natural, and even rich, such as Mia's red dress. The imagery is a combination of fine resolution and soft focus. The resulting effect is really spooky and scary, so be prepared for serious fright and fidgeting in your chair. This is a powerful and horrific visual experience that is exemplary of the genre. (Gary Reber)

The DTS-HD Master Audio™ 5.1-channel soundtrack is intense as well, with aggressive atmospherics and sound effects coupled with deep .1 LFE bass impact. The sonics are spatially holosonic® throughout, with directionalized effects amidst a thunderous rain storm. The orchestral and choral music score is haunting and dynamic, with subtle nuances and strong SPL. Dialogue is consistently intelligible and generally well integrated spatially. The enveloping sonic experience is engaging throughout and delivers a visceral emotional reaction. This is a truly scary soundtrack! (Gary Reber)