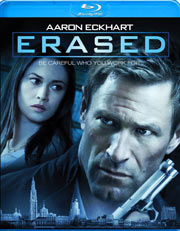 Ex-CIA operative Ben Logan (Eckhart) has been long estranged from his young teenage daughter (Liberato). That instantly changes when both are mysteriously targeted by the organization that originally employed him for termination, and all evidence of Logan's life is Erased. Pursued by a relentless enigmatic agent (Kurylenko), the two go on the run in search of the truth in this non-stop international thriller. (Gary Reber)

Special features include a behind-the-scenes featurette (HD 04:56) and upfront previews.

The 2.35:1 1080p AVC picture was shot digitally, with a stylized dark appearance, with contrast density that produced undefined blacks and shadow detail. The color palette is densely hued with strong saturation. Fleshtones are generally natural in tone in the brighter scenes. Resolution is revealing of fine detail during close-ups of facial features, hair, clothing, and object texture, when light is abundant. The overall visual impact is stylized, to project suspense, and as such appears cinematic. The imagery is pristine throughout. (Gary Reber)

The DTS-HD Master Audio™ 5.1-channel soundtrack is driven by an aggressive and dynamic orchestral music score that heightens the suspense and intrigue, and extends to the surrounds. Atmospherics and sound effects tend to be frontal focused, without surround assist, at least until the action heats up when bullets fire throughout the soundfield. Then the surrounds are engaged aggressively. Deep bass in the .1 LFE channel supports the rhythmic music score and boosts heightened violence sequences. Dialogue is intelligible and decently integrated spatially. This is an intense soundtrack during the action and violence sequences that energize the soundfield. (Gary Reber)