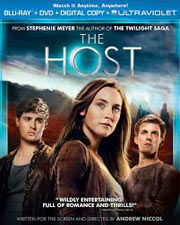 The Host is about an unseen enemy who threatens mankind by taking over humans' bodies and erasing their minds. Melanie Stryder (Ronan) risks everything to protect the people she cares about most, proving that love can conquer all in a dangerous new world. (Gary Reber)

The 2.40:1 1080p AVC picture is beautifully photographed to convey a striking contrast between the alien inhabitants of human bodies searching in their bright chrome-plated vehicles and helicopters and the earthy density of caves, which hide the human colony. The earth tones are spot on and convey warmth and rich golden brown tones. As such, the color palette is naturally hued throughout, Fleshtones are spot on accurate. Contrast is well balanced with deep blacks and revealing shadow delineation. Resolution is superb, with fine detail exhibited throughout, especially in close-ups of facial features, hair, clothing, and object texture. This is a visually engaging picture that is striking in its depiction of alien domination of the human species. (Gary Reber)

The DTS-HD Master Audio™ 5.1-channel soundtrack is hauntingly intriguing with its almost constant lush orchestral music score. The music extends effectively into the surrounds to provide a sense of holosonic® envelopment. Atmospherics and sound effects are perfectly executed as well, with an appropriate directionalized surround presence. Deep bass is reserved but nonetheless effective when enhancing the sound effects. Throughout, the dialogue is intelligible, reverberant, and spatially integrated. The inner voice of Melanie permeates the soundfield, which effectively conveys her struggle to connect with her humanity. This is a most unusual sonic experience that plays a major character role in the telling of the story. Aggressive surround is dominant but nuanced. (Gary Reber)