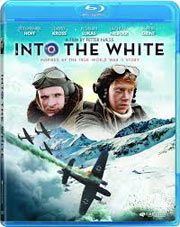 Into The White takes place in 1940, during which two enemy fighter planes are shot down on April 27. After crash-landing, the stranded survivors, both German and British crew members, are forced to seek refuge in an isolated cabin in order to withstand the harsh spring in the mountainous wilderness of Norway. And by doing so, these enemies of war must band together, as their survival depends upon it. (Gary Reber)

Special features include an AXS TV Look Into The White (HD 02:51), upfront previews, the theatrical trailer, and BD-Live functionality.

The 2.35:1 1080p AVC picture is wonderful, with its excellent capture of white snow mountainous landscapes, contrasted with the natural wood tone of the shed and the airmen. The color palette is perfectly natural without any exaggeration of hues. The airmen exhibit a warm tone, with natural fleshtones. Contrast is excellent, with realistic, believable delineation of the airmen drenched in snow. Blacks are nicely defined and shadow delineation is revealing. Resolution is naturally rendered, with fine detail evident throughout. This is a wonderfully cinematic presentation that projects realism. (Gary Reber)

The DTS-HD Master Audio™ 5.1-channel soundtrack is nicely produced with a realistic sense of isolation amidst an icy and snowy landscape. Atmospherics, such as swirling snow winds, envelop the soundfield with punctuated effects such as airplane fly overs and a crash. The .1 LFE channel is effective in enhancing the drama. The music score is perfectly fitting in conveying the sense of isolation and desperate survival. The music is, at times, enhanced with powerful kettle drums that sound authoritative. While in the Norwegian desolate cabin, the Foley effects are effectively rendered. Dialogue is always intelligible and generally spatially integrated. This is a wonderful sonic experience effectively realized. (Gary Reber)