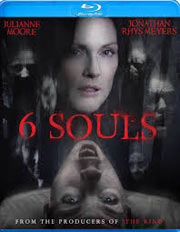 In 6 Souls, evil has many faces. After the death of her husband, forensic psychiatrist Dr. Cara Harding's (Moore) faith in God has been shaken, but not her belief in science. In an attempt to open her up to accepting unexplainable psychiatric theories, her father introduces her to Adam (Meyers), a patient with multiple personalities, who takes on some of the physical characteristics of his other personalities. Cara quickly discovers that Adam's personalities are murder victims, and the more she finds out about him and his past, the closer she and her loved ones are to becoming murder victims themselves. (Gary Reber)

The 2.34:1 1080p AVC picture quality is terrific, with wonderful cinematography. The color palette is perfectly natural, with warm and rich hues that never appear exaggerated. Fleshtones are naturally rendered as well. Contrast is well balanced with deep blacks and revealing shadow delineation. Resolution is revealing of fine detail during close-ups of facial features, hair, clothing, and object texture. This is a visually terrifying visual experience that steadily builds and projects an engaging presence. (Gary Reber)

The DTS-HD Master Audio™ 5.1-channel soundtrack is dynamic and well recorded, with a stirring orchestral music score that extends wide and deep across the soundstage and into the surrounds. Surround envelopment at times is aggressively intense. The instrument timbre is nicely distinguished. The eerieness is supported with deep, extended bass, which is punctuated by .1 LFE energy during the more intense segments. Fleshtones are intelligible but forward sounding. Atmospherics and sound effects are effectively dramatic. This is a nuanced and intense sonic experience that emotionally connects with the terrifying storytelling. (Gary Reber)