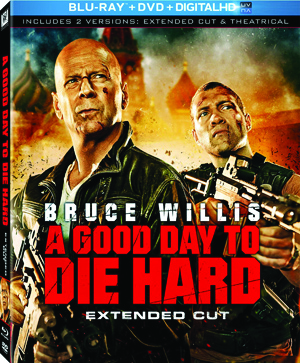 Good Day To Die Hard, A

Bruce Willis is back in action in A Good Day To Die Hard. Playing John McClane, the heroic New York City cop with a knack for being in the wrong place at the right time, his latest predicament takes him all the way to Russia to track down his estranged son, Jack (Courtney), who has been imprisoned in Moscow. But the mission takes a deadly turn as father and son must join forces to thwart a nuclear weapons heist that could trigger World War III. (Gary Reber)

The 1.85:1 1080p AVC picture is stylized with a gritty appearance, unlike the visual aesthetic in the previous films in the series. The imagery is filmic, with a dark and grainy texture. The color palette is rich with greenish, orangish, and blueish hues emphasized. Fleshtones are generally natural in appearance. Resolution is effectively detailed, especially during close-ups of facial features, hair, clothing, and object texture. The overall impact is rawness in perception. Contrast is nicely balanced with deep bass and shadow delineation. This is an engaging visual experience that looks terrific. (Gary Reber)

The DTS-HD Master Audio™ 7.1-channel soundtrack is exploding with seemingly non-stop action and aggressive surround immersion, with the added two surrounds positioned at the rear of the soundfield ala the theatrical Dolby® Atmos format. The sound is intense, with engaging dynamics and strong .1 LFE bass extension to sub-25 Hz frequencies. The holosonic® soundfield provides constant directivity. Gunshots blast in all directions, a helicopter whirls dimensionally, and cars and armored vehicles squeal, flip, and crash with metallic metal-rendering noises. Somehow dialogue manages to stay intelligible and just above the intensity. Marco Beltrami's intense orchestral score is dark and haunting and nicely spatially articulated. This is an exciting sonic experience that won't disappoint. (Gary Reber)