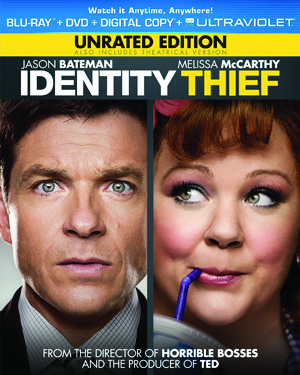 In Identity Thief, unlimited funds have allowed Diana (McCarthy) to live it up on the outskirts of Orlando. There's only one glitch: she's financing her shopping sprees with an ID stolen from Sandy Patterson (Bateman), an accounts rep who lives halfway across the U.S. With only one week to hunt down the con artist before his world implodes, the real Sandy Patterson is forced to extreme measures to clear his name. (Gary Reber)

The 2.36:1 1080p AVC picture was photographed with the Arri Alexa digital system and exhibits a crisp, clean, and pristine image. The color palette is nicely saturated with an overall natural weight. Contrast is well balanced with deep blacks and revealing shadow delineation. Fleshtones are naturally hued and healthy. Resolution is revealing of fine detail, especially during close-ups of facial features, hair, clothing, and object texture. Overall, this is a pleasing visual experience. (Gary Reber)

The DTS-HD Master Audio™ 5.1-channel soundtrack is conventional, with a dialogue focus. Dialogue is forward sounding and wanting in spatial integration throughout. Atmospherics and sound effects are frontal focused as well, with subtle surround at best. The music score is well recorded and provides what there is of aggressive surround envelopment, accompanied with strong .1 LFE bass. Otherwise, there is really nothing distinguished about this soundtrack. (Gary Reber)