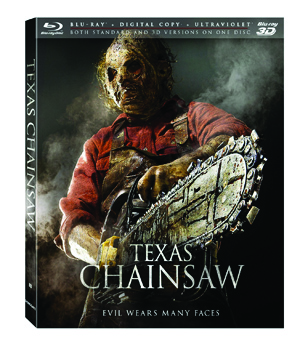 Texas Chainsaw continues the legendary story of the homicidal Sawyer family, picking up where Tobe Hooper's 1974 horror classic left off. In Newt, Texas, people have been going missing without a trace for decades. Years later and hundreds of miles away from the original massacre, a young girl, Heather (Daddario), discovers that she has inherited a sprawling Texas estate from an unknown grandmother. To claim her estate, Heather goes on a road trip with her friends to Newt, but learns that wealth comes at a price when she discovers the horror that waits in the cellar of her mansion. (Gary Reber)

The 2.40:1 1080p MVC 3D picture was shot digitally with the Red Epic camera system mounted to a 3ality Technica TS-5 3D rig and systems. Additional 2D to 3D conversion was provided by OffHollywood. The color rendering is strong with vivid hues, especially lurid reds that appear throughout Leatherface's path of murder. The picture appears purposefully dark with deep blacks but not always revealing shadow delineation. Fleshtones are naturally hued. Resolution is finely delineated with fine object detail, particularly evident in close-ups. The 3D presentation is effective at creating an in-your-face terror when Leatherface holds his chainsaw straight out of the screen. The overall sense of perspective and depth provides effective dimensionality. This is a terrific 3D visual experience that really heightens the terror and horror that fans crave for. (Gary Reber)

The DTS-HD Master Audio™ 7.1-channel soundtrack is aggressively dimensional and directional, especially when Leatherface wields his chainsaw frantically about. The .1 LFE sound effect effectively enhances the sub-25 Hz deep bass visceral impact of the chase segments. The added two channels to the rear of the soundfield aid in the delineation of sonic dimension. The music score is engaging as well, with overall excellent fidelity. This is an effectively dynamic sonic experience that delivers the horrific tension. (Gary Reber)