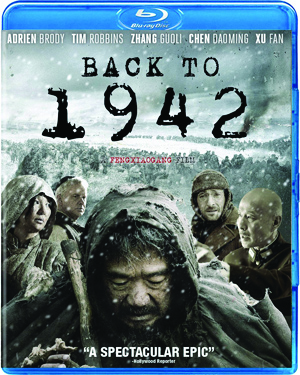 Back To 1942 is the tragic telling of China's Henan province disaster, where three-million people died of starvation. The humanitarian crisis was first sparked by drought, then compounded by a combination of windstorms, government corruption, and a war with Japan. In the midst of the devastation, an American journalist (Brody) searches for answers and slowly comes to understand that there may be a greater connection between these tragedies and his political theories than he once thought. The story follows Landlord Fan (Guoli), who during the 1942 famine finds his house beset by starving villagers. Fan attempts to calm the crowd by preparing a feast. However, his house is burned down in the chaos, prompting Fan, his teenage daughter, his servant, and his tenant to embark on a treacherous journey south, struggling for survival as war with Japan looms on the horizon. Along the way, they encounter an American journalist, a Judge (Wei) and a priest (Hanyu) who has lost his faith. Each meeting reveals the true depth of the despair that grips the country, but the hardships along the way prompt Fan to make some devastating sacrifices that leave him a broken man. (Gary Reber)

Special features include the theatrical trailer and upfront previews.

The 2.38:1 1080p AVC picture is stylized with a desaturated appearance to convey, perhaps, historical perspective. Thus, the imagery never appears vibrant nor exhibits rich hues. Resolution generally is revealing of fine detail, yet softness occurs in scenes comprised of CGI imagery. Contrast is decent, though, black levels never appear pure. Still, shadow delineation is revealing. This is a graphic description of dire human suffering and as such the stylization and cinematography effectively support the storytelling. (Gary Reber)

The DTS-HD Master Audio™ 5.1-channel Mandarin language soundtrack is nicely produced with dramatic atmospherics and sound effects that convey a sense of realism. Fidelity is quite good, and the expansive orchestral music score spans the soundstage and extends to the surrounds. Aggressive surround envelopment occurs during the more dramatic segments, including the open scene and the Japanese attack. Otherwise, the sonic signature permeates the soundtrack with dialogue that, while intelligible and well recorded, is wanting in spatial integration and at times echoes in the front channels. Low-frequency effects or .1 LFE are reserved, but effective, to energize the more dramatic segments, especially as the battle draws nearer and nearer, with bombing from the air and arterial fire. The soundfield becomes aggressively immersive, directionalized, and holosonic®. Overall, this is a satisfying sonic experience that carries the epic storytelling with effective realism. (Gary Reber)