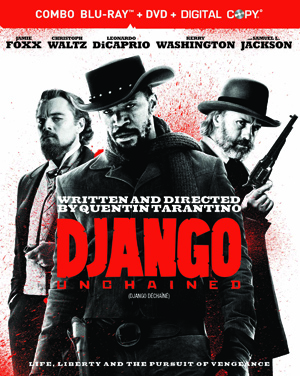 The 2.40:1 1080p AVC picture is terrific, especially in the gorgeous natural western backdrops and in its visually engaging cinematography shot by Robert Richardson. The color palette is stylized with intense primaries and hued distortions for emphasis. Contrast is excellent, with deep blacks and revealing shadow delineation. Fleshtones are naturally rendered throughout, at times with golden glow. Resolution also is superb, with fine detail exhibited throughout, especially during close-ups of facial features, hair, clothing, and object texture. Such detail heightens the intensity of the graphic violence parred with vibrant hues. The picture exhibits a filmic look throughout aided by the anamorphic Panavision photography. This is an intensely colorful rendering with explicit detail and breathtaking cinematography that heightens the epic storytelling. (Gary Reber)

The DTS-HD Master Audio™ 5.1-channel soundtrack is wonderful, with an aggressive holosonic® enveloping soundfield presence created by atmospherics and sound effects, which permeate the soundscapes. The music, often presented in a retro style, is sweeping and punctuated with deep bass. The score is wide and deep and extends effectively to the surrounds. Low-frequency energy is, at times, deep and extended in the .1 LFE channel. The shootouts are effectively energized to heighten the tension. Dialogue sounds natural throughout, with excellent spatial delineation. This is a terrific sonic experience that connects viscerally, with an engaging envelopment presence and realism. (Gary Reber)