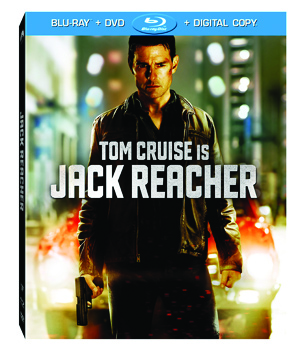 Based on author Lee Child's series of novels and the book One Shot, Jack Reacher is a detective story where an ex-military investigator (Cruise) plays the lead. When an unspeakable crime is committed, all evidence points to the suspect in custody who offers up a single note in defense:"Get Jack Reacher!" The law has its limits, but Reacher does not when his fight for the truth pits him against an unexpected enemy with a skill for violence and a secret to keep. (Gary Reber)

Special features include commentary by Tom Cruise and Director Christopher McQuarrie, commentary by composer Joe Kraemer; three featurettes: When The Man Comes Around (HD 26:49), You Do Not Mess With Jack Reacher: Combat & Weapons (HD 10:27), and The Reacher Phenomenon (HD 11:10); upfront previews; and an UltraViolet digital copy.

The 2.36:1 1080p AVC picture is beautifully photographed in anamorphic Panavision. The filmic texture is warmly and strongly hued with rich and vibrant tones. The imagery is gorgeous. Contrast is excellent. Blacks are solid and deep, and shadow delineation is revealing of background detail. Fleshtones are accurately rendered throughout. Resolution is superb as well, with fine detail exhibited throughout, particularly in close-ups of facial features, hair, clothing, and object texture. Still, the imagery is pristine and perfectly clear, without grain distraction. This is a wonderfully cinematic visual experience that won't disappoint. (Gary Reber)

The DTS-HD Master Audio™ 7.1-channel soundtrack features a haunting orchestral music score with well-recorded natural dynamics. Bass extension is deep, powerful, and always natural sounding. Atmospherics and sound effects are perfectly balanced, with convincing spatial integration throughout. The use of the surrounds is often subtle but effective. The added presence of the two additional channels to the rear provides effective immersive envelopment and added spatial dimension. Sound effects, such as gunshots and squealing muscle car rumblings, can sound dynamic and powerful and effectively enhance the action sequences with aggressive surround envelopment and directionality. The sound is holosonic® and immersive, yet nuanced throughout. Foley effects also are effectively rendered and enhance realism. The sonics are simply realistic and never exaggerated or unnatural sounding. The gun battle in the rain near the end is sonically impressive. Dialogue is first-rate in terms of spatial integration. This is a terrific soundtrack experience that perfectly balances the various sound elements and enhances the building suspense. (Gary Reber)