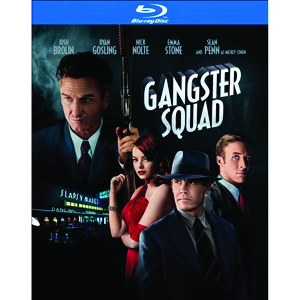 Based on the book by Paul Lieberman, Gangster Squad takes place in Los Angeles in 1949. Ruthless, Brooklyn-born mob king Mickey Cohen (Penn) runs the show in this town, reaping the ill-gotten gains from the drugs, the guns, the prostitutes and—if he has his way—every wire bet placed west of Chicago. And he does it all with the protection of not only his own paid goons, but also the police and the politicians he has under his thumb. It's enough to intimidate even the bravest, street-hardened cop...except, perhaps, for the small, secret crew of LAPD outsiders led by Sgt. John O'Mara (Brolin) and Sgt. Jerry Wooters (Gosling), who come together to try to tear Cohen's world apart. (Gary Reber)

The 2.40:1 1080p AVC picture exhibits a dated, gritty, grungy quality, with saturated colors throughout. Grain also is apparent and used as a stylization element. Colors are darkly saturated with rich and warm hues. Contrast is balanced, though, at times blacks are crushed with poor shadow delineation. This is to create a worn, aged appearance enhanced with brownish overtones. Fleshtones are heavily saturated as well. Resolution is good, despite the graininess, especially during close-ups of facial features, hair, clothing, and object texture. This is an engaging visual experience that projects an "old" feel that works well to portray the period. (Gary Reber)

The DTS-HD Master Audio™ 5.1-channel soundtrack features a well-recorded, intense orchestral score that rips through the storytelling. The sound is dynamic and rhythmic, with a powerful presence emanating from the soundstage and from the surrounds. Atmospherics and sound effects are supported with directionalized effects and boosted by energized, deep and powerful .1 LFE bass. The sonics really intensify, with aggressive panning during shootouts with guns and machine guns, as well as explosions. Dialogue is always intelligible and decently integrated spatially. This is an effective holosonic® soundtrack that delivers a dynamic presence, with excellent fidelity. (Gary Reber)