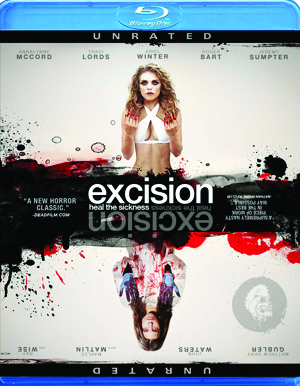 Based on Writer/Director Richard Bates, Jr.'s short film of the same name, Excision follows a disturbed and delusional high school student, Pauline (McCord). Pauline, with aspirations of a career in medicine, goes to extremes to earn the approval of her controlling mother (Lords). While dealing with both being an outcast teenager and having an obsession over curing her sister's fibrosis, Pauline becomes increasingly deranged as her fascination with surgery and flesh and blood grows into something compulsive and demonic, if not epic. (Gary Reber)

The 2.40:1 1080p AVC picture is terrific in appearance, with a strong saturated color palette, yet is naturally hued. Certain segments are stylized to create intensity and horrific feelings. Contrast is pushed for effect, resulting in, at times, a pasty look with deep blacks that are crushed and undefined. Shadow delineation at times is undefined as well. Still, this is the stylized intent. Resolution is basically softly focused, with close-ups exhibiting finer detail. This is a diverse visual experience that is engaging throughout, with segments of horrific intensity. (Gary Reber)

The Dolby® TrueHD 5.1-channel soundtrack is dialogue focused, with the music score providing subtle envelopment. During the horrific segments, at times, atmospherics and sound effects driven by synthesizers liven up the surround soundfield. Deep bass in the .1 LFE channels enhance these segments, but otherwise is limited. Dialogue sounds intelligible and natural throughout. This is a uniquely effective soundtrack that effectively builds intensity and supports the strange delusional genre's story. (Gary Reber)