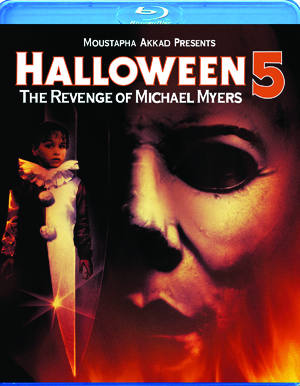 Halloween 5: The Revenge Of Michael Myers

You know, you just can't keep a good ghoul down. Even after being riddled with bullets and falling down a mine shaft, Michael Myers (Donald L. Shanks) returns in Halloween 5. Out for the destruction of his niece (Harris), who has the psychic ability to sense his actions, Myers wreaks havoc on the good people of Haddonfield while Dr. Loomis (Pleasence) tries desperately to defeat him. And just who is the mysterious man in black? (Laurie Sevano)

Previously reviewed as DVDs in Issue 46 and 47, this remastered 1.85:1 1080p AVC picture exhibits generally good quality, though, the picture still looks older than it actually is. Images can be nicely detailed on occasion during close-ups of facial features, hair, clothing, and object texture but are most often softly focused. Colors are generally well balanced, with nicely rendered fleshtones, though, blacks are weak and undefined. While contrast is acceptable, visuals in the darker scenes often lack definition. Overall, this new release is better than the previous releases and is definitely preferred. (Gary Reber)